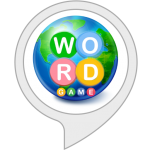 Word game by Sush Productions is a player versus player (PvP) English vocab skill. It encompasses different styles of word games such as scramble, shuffle, memory, and so forth. The game sets a player with a random opponent and they compete against each other. The makers of this voice skill have put in much effort to drill concepts in an enjoyable manner. One of the most enticing factors is that it provides an opportunity for players of all ages to enrich vocabulary in different genres. It doesn’t matter if you’re a beginner, an intermediate learner, or an advanced vocabulary master—be it any level, this game is for you. The rules are straightforward, and it starts off easy at first but gets more challenging as you progress further. Just as the name suggests the focus of the skill is on word games where you can solve word puzzles including word palindrome. The scramble game presents the user with some scrambled letters that they need to unscramble, to form a meaningful word in the mentioned category.

The game is described as a “player versus player word game” with multiple challenges. Depending on the points scored in each level, you will get to unlock new levels that are more challenging and brain teasing. In addition, the voice app includes a range of fascinating genres such as History, Geology, Space, and so on. It also comes with a premium subscription pack that gives access to all the advanced levels of the game and additional genres such as Sci-fi, Health, Music, and  Physics. That being said, there are a few downsides that made it to the list; the first one being those random instances wherein the skill misinterprets user responses. And the other is repetitive questions that you most often wouldn’t encounter in a word game.

Nevertheless, the VOGO Voice team scores Word Game with a 4.6 out of 5-stars based on our review criteria. If you’re looking for some variety in your Alexa word games, Sush Production’s Word Game could be a good option.

Watch How to Leverage VOGO Voice for Your Organisation